American Graduate Day 2015 returns this fall for its fourth consecutive year. Soledad O’Brien will host the all-day broadcast which premieres Saturday, October 3. Broadcast and streamed live from the Tisch WNET Studios at Lincoln Center in New York City, the annual multiplatform event is part of the public media initiative, American Graduate: Let’s Make It Happen, helping communities bolster graduation rates through the power and reach of local public media stations. Featuring seven hours of national and local programming, live interviews and performances, American Graduate Day 2015 will celebrate the exceptional work of individuals and groups across the country who are American Graduate Champions: those helping local youth stay on track to college and career successes. 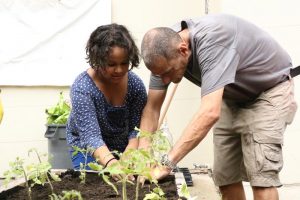 For the first time, this year’s broadcast will also feature seven mini-documentaries that highlight the extraordinary work organizations are doing across the nation to help keep students on the path to graduation and track to college. PBS will spotlight Stephen Ritz and the work Green Bronx Machine is doing in the community to help kids stay in school until graduation between 3PM and 4PM on PBS.

Hosted by Soledad O’Brien, award-winning journalist, American Graduate Day 2015 is set up around critical themes with the goal of inspiring citizens to connect with their local public media station and local community organizations, and get involved as American Graduate Champions in helping the youth of their community succeed.

Viewers and online users who are interested in connecting with local organizations and youth as American Graduate Champions can send a text on the day of broadcast or log on to AmericanGraduate.org to find out more about the national and regional organizations and how to help in their hometowns. Viewers will also be invited to participate in the discussion via Twitter using the #AmGrad hashtag and on Facebook.

American Graduate Day is part of American Graduate: Let’s Make It Happen – a public media initiative made possible by the Corporation for Public Broadcasting to help communities implement solutions to the high school dropout crisis. Additional funding from the Carnegie Corporation of New York. Visit the American Graduate Web site for more details on participating PBS stations as well as other television and radio programs: www.americangraduate.org

Give back everytime you shop on Amazon with smile.amazon.com and Amazon donates a portion to Green Bronx Machine International Inc.